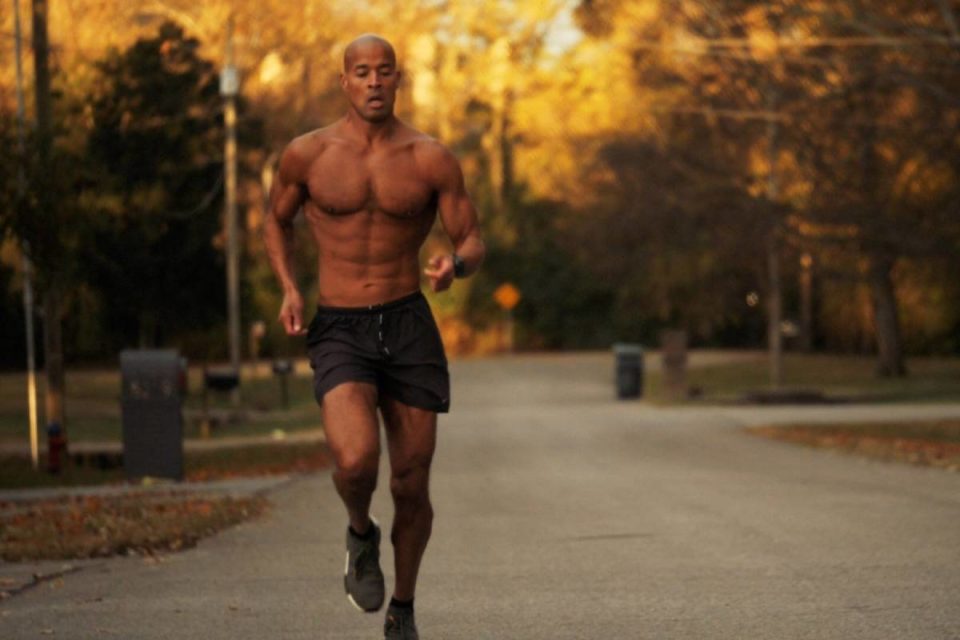 I was never a runner, or into sports. My career is a software developer, and I’ve been doing that for a decade now. At 30 years old, I can confidently say that I’ve always been an introverted individual. I was born overseas and immigrated to Australia when I was only 4 years old.

Where I grew up in Australia, you could consider it the ghetto. The particular neighborhood that I grew up in was especially known for being a drug capital. As such, and as you would expect, there was always crime going around. Being my family was poor, we didn’t really have much of choice but to live here and deal with it.

As the years went on, the place became much safer thanks to government intervention; however, the scene was still there, just not as obvious. Growing up in my neighborhood and the friends that I made (Which are awesome individuals), it was easy to be susceptible to peer pressure. Getting into the wrong scene was never too far away. I’ll get more into this shortly.

Who is David Goggins?

David Goggins is a retired United States Navy SEAL who served in Iraq. He also holds the former world record for the most number of pull-ups done in 24 hours, which was 4,030 pull-ups in 17 hours.

Most notably, he’s known for his running. David has competed in races such as the Badwater 135 Ultramarathon, which is a 135 mile (217 km) race across Death Valley in the Badwater Basin. Temperatures there can reach 130 F (54 degrees celsius). And the fact that it has to be completed in 72 hours is all the more challenging.

David’s feats of endurance don’t stop there; he is also an ultra-cyclist, has done the ultra-man competition, and has even run longer races than the Badwater 135, such as the Moab 240 which is a 240-mile race.

While this is impressive and mind-boggling to most of us, there are plenty of other amazing athletes that also do the same. What makes David different is how he was able to get there.

David suffered from a distressing childhood, which he covers in his memoir “Can’t Hurt Me.” The trials and tribulations that this man has gone through showing us that no matter who you are, no matter where you come from – you can become something. He isn’t only a theorist on the matter; he practices it every day.

From learning disabilities to being abused as a child and suffering from racism, David has gone through many challenges to get to where he is today and is respected by many professional runners as well as popular personalities such as Joe Rogan. This podcast by Joe Rogan, where he talks to David Goggins, nearly breaks the internet.

Whilst I grew up with an amazing family and had great friends, where I grew up and where I went to school shaped me into who I am as a person today. Being around drugs was the norm in my neighborhood, and by the time we were in 9th grade, we were already smoking marijuana regularly.

As the years went on and we got out of high school, music festivals were the thing. From here, other drugs started becoming more frequent such as party ones.

Without getting too graphic, when you abuse something too much, it will eventually become an addiction. And once something becomes an addiction, it’s wired in your brain, and it’s extremely hard to get out. Unfortunately, it wasn’t only drugs as well as gambling plays a big factor in where I grew up as well.

Having these multiple addictions whilst trying to grow up in your 20’s to become the person you want to be for the rest of your life, you realize that things start to go south very fast. Having started a new family, I knew I had to get out of these situations that were causing mental health problems slowly building up.

Constantly repeating the same mistakes is tough, and not knowing how to find a way out is even tougher. It wasn’t until I was finally in too much pain that I wanted to find answers. I started looking for videos to better myself and came across David Goggins, and the Joe Rogan podcast mentioned previously.

After finding David Goggins, and listening to his videos as well as reading his book “Can’t Hurt Me,” it caused a shift in the way that I think. I started to realize that we all go through our own pains and troubles but that we need to own it. Through David’s book, he provides tools that you can use immediately to start making your life better. Basically, I had a diary and a goal that I wanted to work towards: to be better.

As I didn’t have anything in particular that I wanted to do at the time, I took up running as it sounded interesting when listening to David Goggins. Because I like to take the extreme on everything, I signed up for a marathon, which was 3 months away with zero running experience.

However, constantly holding myself accountable whilst reading David’s book and listening to his videos. I was able to better myself through running. Because I was so busy preparing for the marathon (By having a clear goal), I didn’t have time for any of the other rubbish. My mind felt free for the first time in a long time.

Here is a picture of me at the marathon (Down 6 pounds as well!): 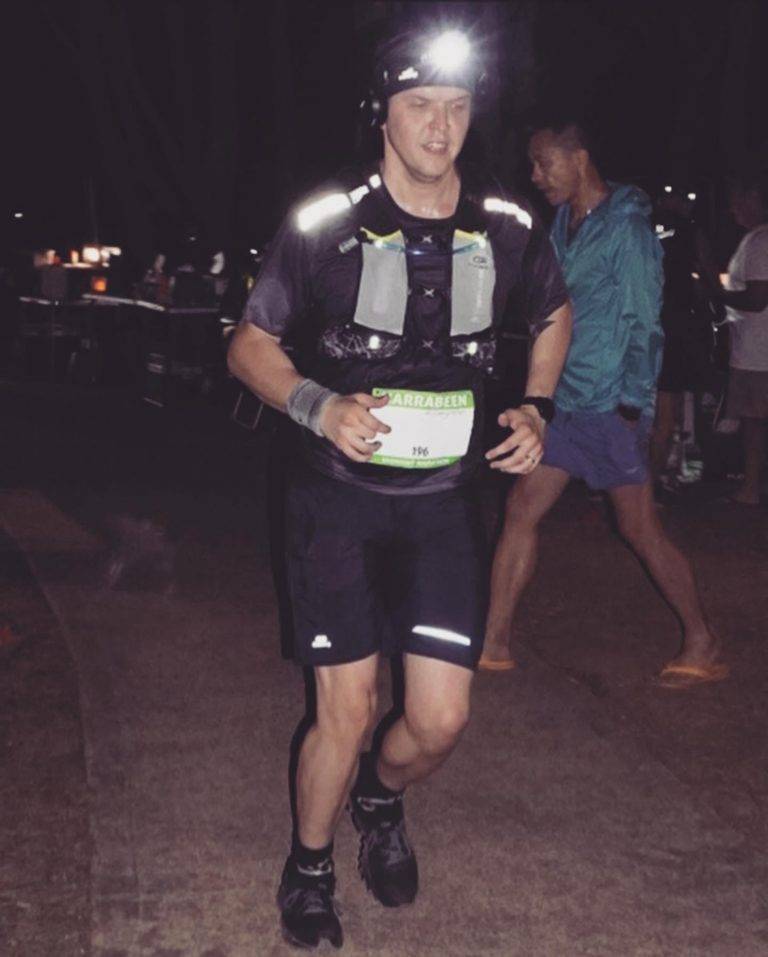 The feeling that I felt was one of sheer accomplishment. I was truly happy that I was able to keep training for my goal and then finally reach it. And the process itself of training, keeping accountable, and documenting everything that I was doing helped me mentally and pushed me out of the road of addiction.

What happened next was a surprise, though, because my goal was finished and I didn’t have a backup goal, I could slowly feel myself going back to my old self.

I had already planned to meet up with David Goggins at an event called Upgrade Your Life 2020. I had the tickets for this event and was good to go but started to make some poor choices in life again and felt like I was heading down the wrong path again.

After meeting David and a bunch of other friendly people in the event, it made me realize the reason I started falling off the wheel again was that I didn’t have another goal in mind to work on. Here’s a photo of David and me at the event: 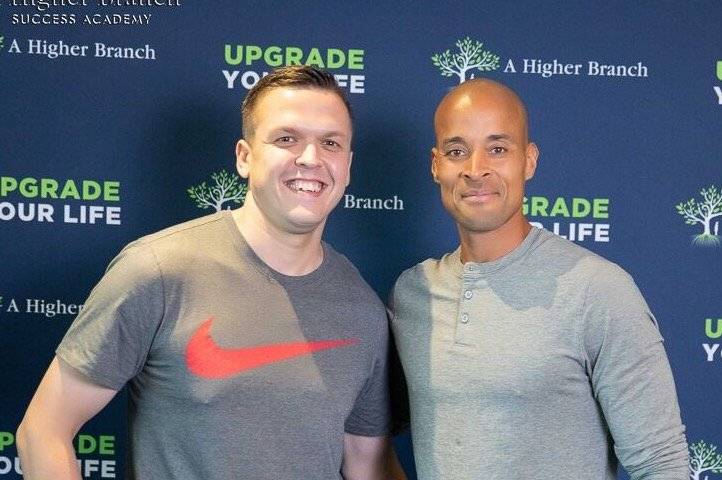 Shortly after, I started to work on finding a way to stay consistent. I realized I need to always be on the ball. This is what lead me to start on my blog, The Ultimate Primate. It is based around health and fitness, and I hope to be able to influence as many people to start living their lives and become the ultimate version of themselves.

We can all become something that we’re proud of in our lives. The first step needs to begin with us, though. If you’re currently lost or are looking to re-invigorate your life, then reading David’s book may provide some insight.

Some of us, however, have gone through a lot in life and find it hard to do so. In the end, we need to remember that everyone has things that they’re dealing with, and we’re all suffering in one way or another. Some less than others, however, the pain is real for everyone.

It’s up to us to look inside ourselves to find out what we’re passionate about and what we want to achieve. David’s book can create the spark to get this going; however, ultimately, it’s up to us to keep the fire burning strong.

Check out my review on Can’t Hurt Me by David Goggins that I posted on my blog if you’re interested in finding out more about him, what he does, and his history (And not so much about me!).

Scalp Micropigmentation 101: Everything You Need to Know About This Permanent Treatment

How To Take Bikes on a Family Vacation This Summer

Marko Rakic is a trail runner from Sydney, Australia. He is the lead writer for his blog. When he's not doing laps around Sydney, you will find Marko writing on his health and fitness blog, The Ultimate Primate. Marko believes that through fitness and healthy living that we can all live a happier life and wants to send that message across.

Sprain: what it is, symptoms, causes and treatment

How to get Eiza Gonzalez body in 5 simple steps?

How to choose your nude lipstick according to your skin tone